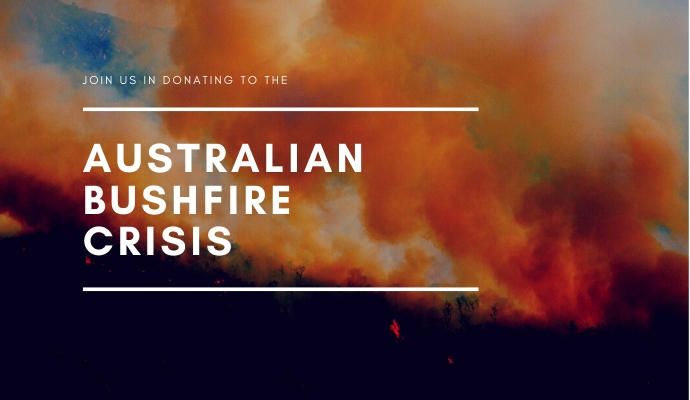 As of January 10th, at least 25 people have been killed, over 2,000 homes have been destroyed, and an estimated 500 million animals perished in the wildfires raging across Australia. Join us in donating to help the people of Australia during these catastrophic events.  T.R. McKenzie will be matching all resident donations up to $5,000 to any charity related to or aiding the Australian Bushfire Crisis. Simply email your donation receipt (now through January 31, 2020) to ellen@trmckenzie.com or your property manager and T.R. McKenzie will match it.

Here are some links to non-profit organizations and charities that are currently collecting funds to provide relief to Australia:

The New South Wales Rural Fire Service (RFS) is the world’s largest volunteer fire service, and their members provide fire and emergency services to approximately 95 percent of NSW. So many RFS volunteers have been called into service for months now, they have had to go without pay and are unable to return to their regular jobs due to fighting the fires. Learn more about the RFS: https://www.rfs.nsw.gov.au/volunteer/support-your-local-brigade

NSW Wildlife Information Rescue and Education Services (WIRES) has been rescuing and caring for native animals for more than 30 years. The charity has stated that in its history, it has never seen a concurrent series of emergency events like those that began in November. In December alone there were more 20,000 calls to the WIRES help line and volunteers attended more than 3,300 rescues. To learn more and to donate visit: https://www.wires.org.au/

T.R. McKenzie, Inc. is a locally owned real estate brokerage, property management firm, and construction management company. We have been providing residential and commercial housing opportunities to the Madison area for over thirty years.

What’s Your Home Worth?

Please fill out the form below and we’ll provide you with a real-time and honest price opinion based on our experience in the local market-no obligation, no cost.